From Failed Governance to a Peaceful Protest 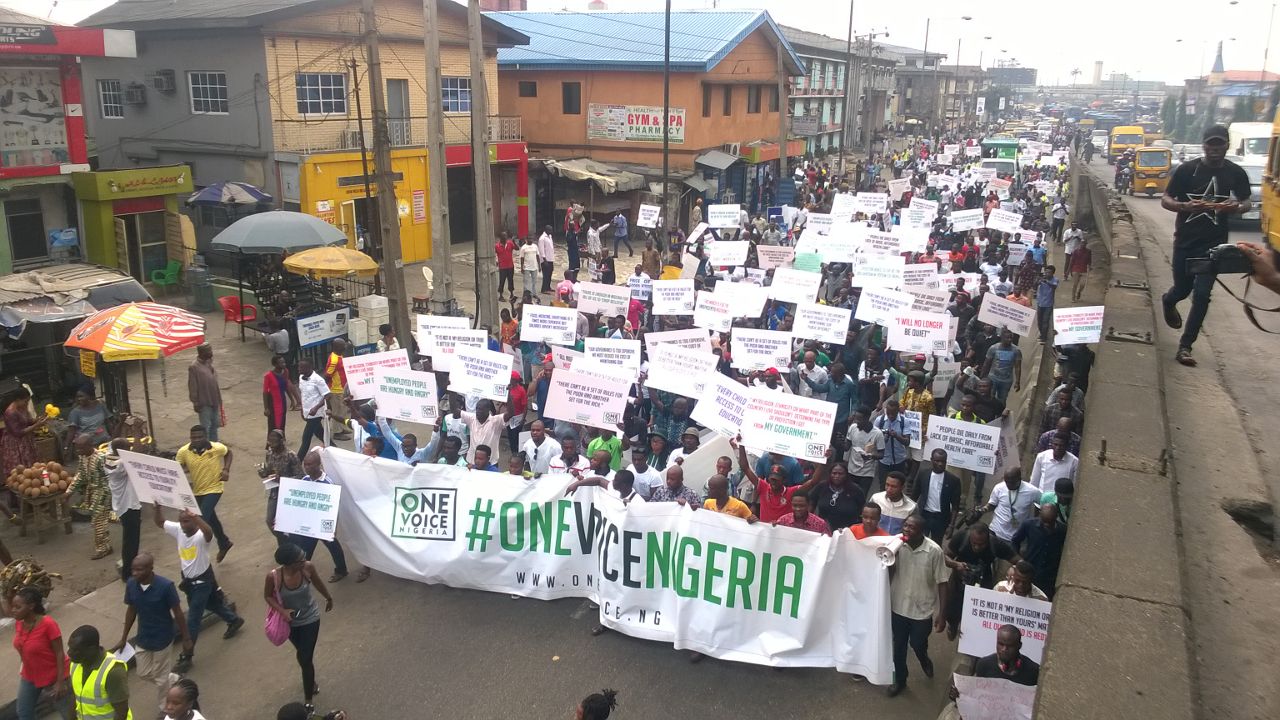 I think for some reasons we can’t explain, we all have been complacent in how we are governed as Nigerians. It’s a shame; to our leaders, those who came to give us the change agenda, and those who pretended that they would give us a better future.

Almost two years ago, Nigeria went to polls to vote for change, we were eager and hoping that the days of suffering and smiling will soon be over. We will sooner or later have a government of the people, by the people and for the people. Unfortunately, this has not been the case. Nigeria has been in a state of disaster and the man we thought would help us eradicate suffering from the table of the people has been the person actually building it. Yet again a promise not kept.

The One Voice protest rally that was initiated by Tuface Idibia is a protest that is long overdue. While a lot of us complain and blame everybody but them selves regarding the state of the economy, Tuface realized that it takes one person to awaken the consciousness in us  all. Though Tuface reluctantly backed out from this protest because he was intimidated by the police; those we entrusted our safety, we still hold him in great esteem.  I personally think that because of him, people saw the need to carry on the protest whether the police would stop them or not.

To say I am disappointed in the Nigerian government is an understatement. So many promises, all were just talk. The economy is recession, and without proper planning we may end up in a depression. The president promised that with the 2017 economic budget, we would come out of it, but I ask what is plan though, is it with 70% of recurrent expenditure and 30% capital expenditure? Running our present system of governance is expensive, coupled with the fact that nothing is working. I will explain.

Take for instance the Civil Service. The Nigerian Ministries and parastatals are in shambles. The civil service is a waste. During my youth service I served in the ministry. To my surprise I found out that civil servant do nothing. Workers get to work at 8am, talk with friends, eat, go for breaks at will, watch different television programmes (the one’s that have TVs in their departments) and then when its 4pm they say their good byes. Is it the legislatures who are paid exorbitantly but refuse to develop their constituents, the people who have elected them there?

This year the Buhari government started a welfare program called The Conditional Cash Transfer (CCT). This program gives 5,000 Naira to poor families. This in itself is flawed; because there is no criteria to measure who is poor. Secondly, there is no way of measuring who actually got the money because there is no proper documentation of Nigerians in this economy. But really, the real problem I see is that this system is going to run the government bankrupt.  5,000Naira multiplied by 50,000 people using the least possible figure will amount to 250 million naira. This welfare program will conveniently take half a trillion Naira (500BN Naira) haba, this is ridiculous; for a country that says it’s in recession. These money can be used for capital projects like road, primary health cares, or even pay the salaries of government workers and teachers, but what do I now, I am sure they knew that, but because of greed this wont be done.

Finally, I commend those took part in the protest rally on the 6th of February 2017.  This is the first of many to come; we must all stand together to refuse government of the rich, by the rich, to make laws for the poor to suffer.

..FIND YOUR VOICE IN THIS WORLD OF OPPORTUNITIES.